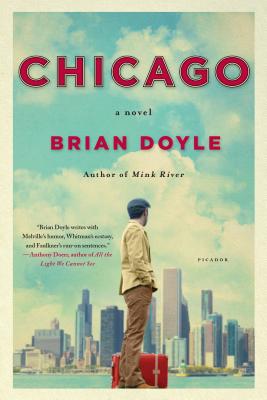 On the last day of summer, a young college grad moves to Chicago and rents a small apartment on the north side of the city, by the lake. This is the story of the five seasons he lives there, during which he meets gangsters, gamblers, policemen, a brave and garrulous bus driver, a cricket player, a librettist, his first girlfriend, a shy apartment manager, and many other riveting souls, not to mention a wise and personable dog of indeterminate breed.

A love letter to Chicago, the Great American City, and a wry account of a young man’s coming-of-age during the one summer in White Sox history when they had the best outfield in baseball, Chicago is a novel that will plunge you into a city you will never forget and may well wish to visit for the rest of your days.

BRIAN DOYLE (1956-2017) was the longtime editor of Portland Magazine at the University of Portland, in Oregon. He was the author of six collections of essays, two nonfiction books, two collections of “proems,” the short story collection Bin Laden’s Bald Spot, the novella Cat’s Foot, and the novels Mink River, The Plover, and Martin Marten. He is also the editor of several anthologies, including Ho`olaule`a, a collection of writing about the Pacific islands.

Doyle’s books have seven times been finalists for the Oregon Book Award, and his essays have appeared in The Atlantic Monthly, Harper’s, Orion, The American Scholar, The Sun, The Georgia Review, and in newspapers and magazines around the world, including The New York Times, The Times of London, and The Age (in Australia). His essays have also been reprinted in the annual Best American Essays, Best American Science & Nature Writing, and Best American Spiritual Writing anthologies.

Among various honors for his work is a Catholic Book Award, three Pushcart Prizes, the John Burroughs Award for Nature Essays, Foreword Reviews' Novel of the Year award in 2011, and the Award in Literature from the American Academy of Arts and Letters in 2008 (previous recipients include Saul Bellow, Kurt Vonnegut, Flannery O’Connor, and Mary Oliver).