A Bed of Scorpions: A Mystery (Sam Clair #2) 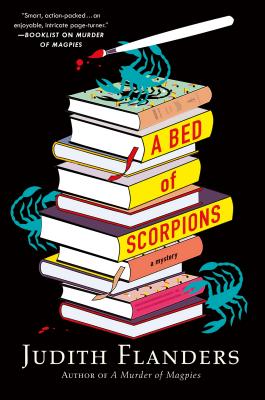 A Bed of Scorpions: A Mystery (Sam Clair #2)

Summer in London-the sun is finally shining, the flowers are in bloom, and life is humming merrily along for book editor Samantha Clair, off to lunch with her old friend, art-dealer Aidan Merriam. Humming merrily until she learns that his partner has just been found dead in their gallery, slumped over his desk with a gun in his hand. Could anything be worse? Oh yes, the police investigation is being led by Inspector Jake Field, who just happens to be Sam's new boyfriend. And Aidan, who just happens to be Sam's ex-boyfriend, wants Sam's help. Finding herself drawn into another investigation, Sam does the only sensible thing and calls her mother. Before long, Sam finds her loyalties stretched to the limit as she herself is threatened.

Armed with nothing more than her trusty weapons of satire, cynicism and a stock of irrelevant information culled from novels, Sam races to find a killer who is determined to find her first in the newest fast-paced, uproarious novel in the critically acclaimed series from New York Times bestselling author Judith Flanders.

JUDITH FLANDERS is an international bestselling author and one of the foremost social historians of the Victorian era. Her book Inside the Victorian Home was shortlisted for the British Book Awards History Book of the Year. Judith is a frequent contributor to the Daily Telegraph, Guardian, Spectator, and the Times Literary Supplement. She lives in London.