Act One: An Autobiography 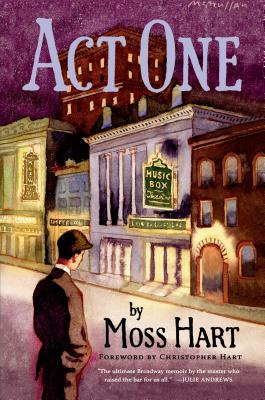 Act One: An Autobiography

By  Moss Hart , Foreword by  Christopher Hart
$ 23.99
Out of Stock In Store (Available to Order)

Moss Hart's Act One, which Lincoln Center Theater presented in 2014 as a play written and directed by James Lapine, is one of the great American memoirs, a glorious memorial to a bygone age filled with all the wonder, drama, and heartbreak that surrounded Broadway in the early twentieth century. Hart's story inspired a generation of theatergoers, dramatists, and readers everywhere as he eloquently chronicled his impoverished childhood and his long, determined struggle to reach the opening night of his first Broadway hit. Act One is the quintessential American success story.

Born in New York City in 1904, Moss Hart began his career as a playwright in 1925 with The Hold-Up Man, yet achieved his first major success in the 1930 collaboration with George S. Kaufman, Once in a Lifetime. In addition to numerous Broadway productions, such as The Man Who Came to Dinner and You Can't Take it With You, which was awarded the Pulitzer Prize in 1938, Hart wrote screenplays for Gentleman's Agreement and A Star is Born. Moss Hart also gained universal recognition for his award-winning direction of My Fair Lady in 1956.