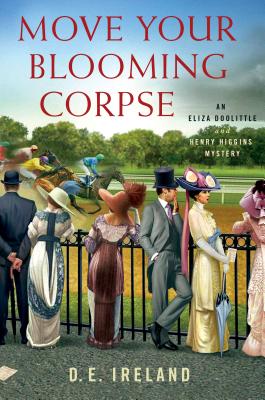 In the second book from talented writing team D.E. Ireland, famous literary characters Eliza Doolittle and Henry Higgins once again come to life as a hilarious investigative team. Move Your Blooming Corpse explores the Edwardian racing world and the fascinating characters who people it, from jockeys to duchesses, in this delightful traditional mystery that will appeal to fans of British mysteries.

Eliza Doolittle and Henry Higgins are at the posh Royal Ascot, the biggest horse racing event of the season. Eliza's father is the new co-owner of a champion racehorse, and Eliza and Henry are excited to cheer the Donegal Dancer on to victory. However, their idyllic outing takes a serious turn when a victim is trampled during the Gold Cup race and someone is found murdered in the stables.

With time running out before the upcoming Eclipse Stakes, she and Higgins investigate jealous spouses, suffragettes and the colorful co-owners of the Donegal Dancer. But can they outrace the murderer, or will there be another blooming corpse at the finish line?

D. E. IRELAND is a writing team of two Michigan authors who met as undergraduates in an anthropology class and have remained friends ever since. Both are married to computer geeks, and each has one beautiful and brilliant daughter. Lifelong book lovers and history buffs, they have authored several novels on their own.