And Yet They Persisted: How American Women Won the Right to Vote 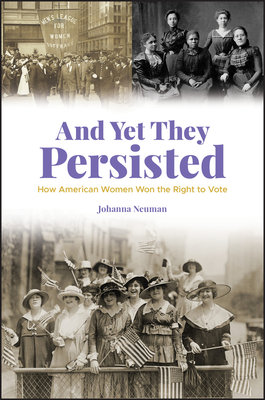 And Yet They Persisted: How American Women Won the Right to Vote

By  Johanna Neuman
Paperback
$ 38.95
Out of Stock In Store (Available to Order)

A comprehensive history of the women's suffrage movement in the United States, from 1776 to 1965

Most suffrage histories begin in 1848, when Elizabeth Cady Stanton first publicly demanded the right to vote at the Women's Rights Convention in Seneca Falls, New York. And they end in 1920, when Tennessee became the 36th state to ratify the 19th Amendment, removing sexual barriers to the vote. And Yet They Persisted traces agitation for the vote over two centuries, from the revolutionary era to the civil rights era, excavating one of the greatest struggles for social change in this country and restoring African American women and other women of color to its telling.

In this sweeping history, author Johanna Neuman demonstrates that American women defeated the male patriarchy only after they convinced men that it was in their interests to share political power. Reintegrating the long struggle for the women's suffrage into the metanarrative of U.S. history, Dr. Neuman sheds new light on such questions as:

And Yet They Persisted: How American Women Won the Right to Vote his is the ideal text for college courses in women's studies and history covering the women's suffrage movement, as well as courses on American History, Political History, Progressive Era reforms, or reform movements in general.

Click here to read Johanna Neuman's two-part blog post about the hidden history of Women's Suffrage as we celebrate the centennial anniversary of the 19th Amendment.

Johanna Neuman is an author, award-winning journalist, and one of the nation's preeminent historians of women's suffrage in the United States. Johanna received a Nieman Fellowship at Harvard University, served as president of the White House Correspondents' Association, and currently holds the title of Scholar in Residence, History Department, American University. She is author of the acclaimed book Gilded Suffragists: The New York Socialites Who Fought for Women's Right to Vote.