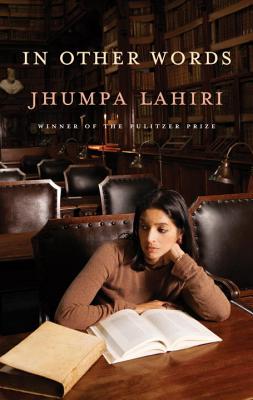 From the best-selling author and Pulitzer Prize winner, a powerful nonfiction debut—an “honest, engaging, and very moving account of a writer searching for herself in words.” —Kirkus Reviews (starred)

In Other Words is a revelation. It is at heart a love story—of a long and sometimes difficult courtship, and a passion that verges on obsession: that of a writer for another language. For Jhumpa Lahiri, that love was for Italian, which first captivated and capsized her during a trip to Florence after college. Although Lahiri studied Italian for many years afterward, true mastery always eluded her.

Seeking full immersion, she decides to move to Rome with her family, for “a trial by fire, a sort of baptism” into a new language and world. There, she begins to read, and to write—initially in her journal—solely in Italian. In Other Words, an autobiographical work written in Italian, investigates the process of learning to express oneself in another language, and describes the journey of a writer seeking a new voice.

Presented in a dual-language format, this is a wholly original book about exile, linguistic and otherwise, written with an intensity and clarity not seen since Vladimir Nabokov: a startling act of self-reflection and a provocative exploration of belonging and reinvention.

JHUMPA LAHIRI is the author of four works of fiction: Interpreter of Maladies, The Namesake, Unaccustomed Earth, and The Lowland; and a work of nonfiction, In Other Words. She has received numerous awards, including the Pulitzer Prize; the PEN/Hemingway Award; the PEN/Malamud Award; the Frank O’Connor International Short Story Award; the Premio Gregor von Rezzori; the DSC Prize for South Asian Literature; a 2014 National Humanities Medal, awarded by President Barack Obama; and the Premio Internazionale Viareggio-Versilia, for In altre parole.


ANN GOLDSTEIN is an editor at The New Yorker. She has translated works by, among others, Elena Ferrante, Pier Paolo Pasolini, Primo Levi, Giacomo Leopardi, and Alessandro Baricco, and is the editor of The Complete Works of Primo Levi in English. She has been the recipient of the PEN Renato Poggioli Translation Award, a Guggenheim Fellowship, and awards from the Italian Foreign Ministry and from the American Academy of Arts and Letters.