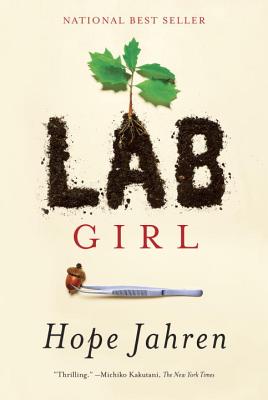 "A beautifully written memoir about the life of a woman in science, a brilliant friendship, and the profundity of trees. Terrific." —Barack Obama

An illuminating debut memoir of a woman in science; a moving portrait of a longtime friendship; and a stunningly fresh look at plants that will forever change how you see the natural world

Acclaimed scientist Hope Jahren has built three laboratories in which she’s studied trees, flowers, seeds, and soil. Her first book is a revelatory treatise on plant life—but it is also so much more.

Lab Girl is a book about work, love, and the mountains that can be moved when those two things come together. It is told through Jahren’s remarkable stories: about her childhood in rural Minnesota with an uncompromising mother and a father who encouraged hours of play in his classroom’s labs; about how she found a sanctuary in science, and learned to perform lab work done “with both the heart and the hands”; and about the inevitable disappointments, but also the triumphs and exhilarating discoveries, of scientific work.

Yet at the core of this book is the story of a relationship Jahren forged with a brilliant, wounded man named Bill, who becomes her lab partner and best friend. Their sometimes rogue adventures in science take them from the Midwest across the United States and back again, over the Atlantic to the ever-light skies of the North Pole and to tropical Hawaii, where she and her lab currently make their home.

Jahren’s probing look at plants, her astonishing tenacity of spirit, and her acute insights on nature enliven every page of this extraordinary book. Lab Girl opens your eyes to the beautiful, sophisticated mechanisms within every leaf, blade of grass, and flower petal. Here is an eloquent demonstration of what can happen when you find the stamina, passion, and sense of sacrifice needed to make a life out of what you truly love, as you discover along the way the person you were meant to be.

HOPE JAHREN is an award-winning scientist who has been pursuing independent research in paleobiology since 1996, when she completed her PhD at University of California Berkeley and began teaching and researching first at the Georgia Institute of Technology and then at Johns Hopkins University. She is the recipient of three Fulbright Awards and is one of four scientists, and the only woman, to have been awarded both of the Young Investigator Medals given within the Earth Sciences. She was a tenured professor at the University of Hawaii in Honolulu from 2008 to 2016, where she built the Isotope Geobiology Laboratories, with support from the National Science Foundation, the Department of Energy and the National Institutes of Health. She currently holds the J. Tuzo Wilson professorship at the University of Oslo, Norway.