Vegetarian India: A Journey Through the Best of Indian Home Cooking: A Cookbook 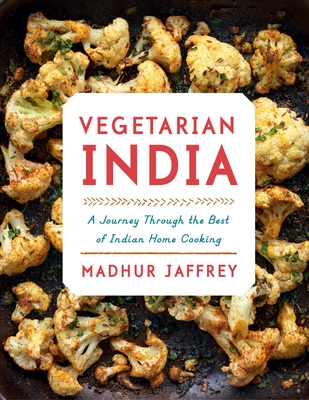 Vegetarian India: A Journey Through the Best of Indian Home Cooking: A Cookbook

No one knows Indian food like Madhur Jaffrey. For more than forty years, the “godmother of Indian cooking” (The Independent on Sunday) has introduced Western home cooks to the vibrant cuisines of her homeland. Now, in Vegetarian India: A Journey Through the Best of Indian Home Cooking, the seven-time James Beard Award–winning author shares the delectable, healthful, vegetable- and grain-based foods enjoyed around the Indian subcontinent.

Vegetarian cooking is a way of life for more than 300 million Indians. Jaffrey travels from north to south, and from the Arabian Sea to the Bay of Bengal, collecting recipes for the very tastiest dishes along the way. She visits the homes and businesses of shopkeepers, writers, designers, farmers, doctors, weavers, and more, gathering their stories and uncovering the secrets of their most delicious family specialties. From a sweet, sour, hot, salty Kodava Mushroom Curry with Coconut originating in the forested regions of South Karnataka to simple, crisp Okra Fries dusted with chili powder, turmeric, and chickpea flour; and from Stir-Fried Spinach, Andhra Style (with ginger, coriander, and cumin) to the mung bean pancakes she snacks on at a roadside stand, here Jaffrey brings together the very best of vegetable-centric Indian cuisine and explains how home cooks can easily replicate these dishes—and many more for beans, grains, and breads—in their own kitchens.

With more than two hundred recipes, beautifully illustrated throughout, and including personal photographs from Jaffrey’s own travels, Vegetarian India is a kitchen essential for vegetable enthusiasts and home cooks everywhere.

MADHUR JAFFREY is the author of many previous cookbooks—seven of which have won James Beard Awards—and was named to the Who’s Who of Food and Beverage in America by the James Beard Foundation. She is the recipient of an honorary CBE from Queen Elizabeth II for her services to drama and promoting the appreciation of Indian food and culture. She is also an award-winning actress, having won the Silver Bear for Best Actress at the Berlin Film Festival, with numerous major motion pictures to her credit. She lives in New York City.