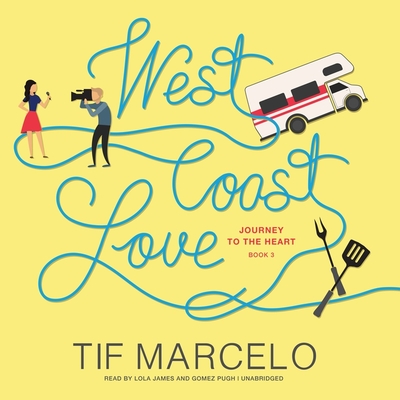 An aspiring food journalist and a grumpy cameraman take to the California coast for the biggest foodie event of the year in this sweet third novel in Tif Marcelo's charming and romantic Journey to the Heart series.

Online food blogger Victoria Aquino has spent years doing social media for True North and Paraiso Retreats, and she's ready to take her blog and writing to the next level. But after she was catfished and suffered a heartbreak, she's clamoring for change. She auditions for and accepts a food host opportunity: covering the Labor Day holiday BBQ festivals along the California coast. For eight days, she'll travel with a producer and a camera and sound person, in a vintage--and rickety--RV, and she'll get her very first byline as a video journalist. The only catch? She can't stand BBQ.

And the cameraman also auditioned for the job.

Joel Silva is a cameraman with big dreams of his own, and when he finds out that the job he auditioned for went to Victoria--a woman he'd gotten to know covering Paraiso Retreats, and someone he later slept with--he's understandably furious and curious. Joel knows the BBQ circuit like the back of his hand, and he now has to help Victoria do her job amidst their growing attraction.

When the producer picks up on their push/pull vibe and increases the ante to feature both in front of the camera with the best host taking the next cross-country feature, the two have to decide: is their blossoming romance something that should be left to fizzle along with BBQ season? Or is it the beginning of something even more delicious?