Get Me To The Grave On Time 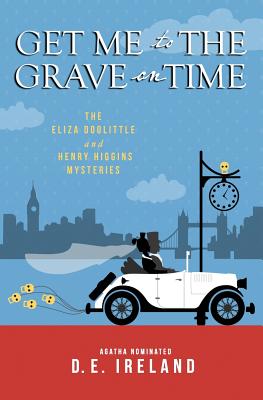 Get Me To The Grave On Time

"D.E. Ireland takes Four Weddings and a Funeral and does it one better by adding murder " Victoria Thompson, Bestselling author of Murder in Morningside Heights "Pull out the stopper D.E. Ireland once again uncorks a charming and high-spirited mystery, with the enchanting Eliza Doolittle and delightfully grumpy Henry Higgins on the case. An enjoyable and amusing read " Susanna Calkins, Macavity Award winner for The Masque of a Murderer Although Eliza still refuses to marry Freddy Eynsford Hill, everyone around her seems headed for the altar. Not only is her cousin Inspector Jack Shaw about to wed his sweetheart, but Freddy's younger sister Clara is engaged, along with the niece of Henry Higgins. Another blushing bride is the sixty-year-old Duchess of Carbrey, who plans to marry a handsome fellow half her age. But when the groom is found dead, a jealous mistress is blamed for the murder. However, the death may also be connected to the stolen treasure of an Indian temple. Disaster strikes next at Jack and Sybil's wedding. Soon after, the wedding reception of Higgins's niece takes a lethal turn. Someone is targeting bridegrooms, and the wedding of Freddy's sister is next. Before another bridal bouquet is tossed, Higgins and Eliza must track down the killer. Otherwise, Clara's bridegroom - and perhaps the bride herself - may be murdered before they can get to the church on time.

D.E. Ireland is the pseudonym of long time friends and award-winning authors, Meg Mims and Sharon Pisacreta. In 2013 they decided to collaborate on a unique series based on George Bernard Shaw's witty play Pygmalion, which also inspired the classic musical My Fair Lady. At work on Book Four of their Agatha nominated series, they also pursue separate writing careers. Currently both of them write cozy mysteries for Kensington under their respective new pen names: Sharon Farrow and Meg Macy. Sharon's Berry Basket series debuted in October 2016, and Meg's Shamelessly Adorable Teddy Bear series will be released in May 2017. The two Michigan authors have patient husbands, brilliant daughters, and share a love of tea, books, and history. Follow D.E. Ireland on Facebook, Twitter, and www.deireland.com