Edge of Awe: Experiences of the Malheur-Steens Country 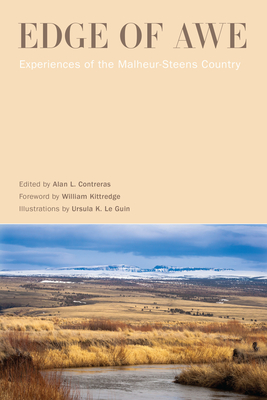 Edge of Awe: Experiences of the Malheur-Steens Country

This compelling anthology gathers together personal impressions of the Malheur-Steens country of southeastern Oregon, known for its birding opportunities, its natural beauty and remoteness, and, more recently, for the 2016 armed takeover of the Malheur National Wildlife Refuge. Contributors of poetry and narrative nonfiction include biologists, students, tourists, birders, and local residents, thus reflecting the perspectives of both visitors and residents.

Edge of Awe celebrates the immense variety of human experience in the Malheur-Steens region. This high-desert marsh country has long been a place of human habitation, work, and recreation, but this compendium is weighted toward the writing of visitors over the past one hundred years. It encompasses a wide range of experiences, such as fishing the Blitzen River, attending the Steens Running Camp, leading a mule train on Steens mountain, looking for rare migrant birds, boating on the great marshes, and much more.

Anyone who has visited the awe-inspiring Malheur-Steens country or plans to do so, and anyone with an interest in the region, will find inspiration in this literary companion.

ALAN L. CONTRERAS is a fourth-generation Oregonian who has been visiting the Malheur-Steens region for five decades. A graduate of the University of Oregon and its law school, he is retired from work in higher education. He is the author of several books published by Oregon State University Press, including Afield and Birds of Oregon, and has also published three poetry collections, a book on state regulation of colleges, and others. He lives in Eugene.