Seeing Silence: The Beauty of the World’s Most Quiet Places 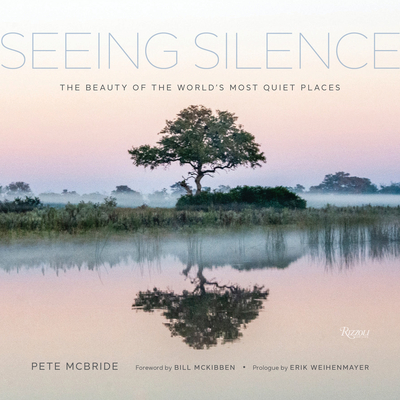 Seeing Silence: The Beauty of the World’s Most Quiet Places

By  Pete McBride , Foreword by  Bill McKibben , Prologue by  Erik Weihenmayer
$ 30.00
Likely On Our Shelves

In a world ever more congested and polluted with both toxins and noise, award-winning photographer Pete McBride takes readers on a once-in-a-lifetime escape to find places of peace and quiet—a pole-to-pole, continent-by-continent quest for the soul.


We tend to think of silence as the absence of sound, but it is actually the void where we can hear the sublime notes of nature. Here, photographer Pete McBride reveals the wonders of these hushed places in spectacular imagery—from the thin-air flanks of Mount Everest to the depths of the Grand Canyon, from the high-altitude vistas of the Atacama to the African savannah, and from the Antarctic Peninsula to the flowing waters of the Ganges and Nile.

These places remind us of the magic of being “truly away” and how such places are vanishing. Often showing beauty from vantages where no other photographer has ever stood, this is a seven-continent visual tour of global quietude—and the power in nature’s own sounds—that will both inspire and calm.

Pete McBride is a self-taught photographer, filmmaker, writer, and public speaker who has traveled on assignment to over 75 countries for the National Geographic Society, Smithsonian, Google, and the Nature Conservancy. His documentary Into the Canyon was nominated for a 2020 Emmy, and his book The Grand Canyon won the National Outdoor Book Award and the National Park Book of the Year. Bill McKibben is an environmentalist and writer who contributes to the New York Times, The Atlantic Monthly, and Outside. In 2001, Erik Weihenmayer became the first blind person to reach the summit of Mt. Everest. He is one of the most sought-after speakers in the world.