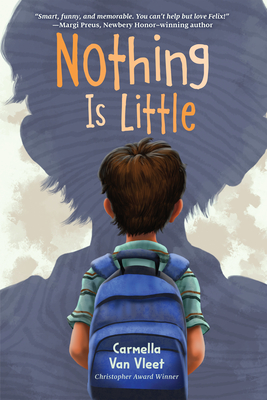 The case of a missing father is hard to crack . . . even for Felix, a tiny kid with a huge heart and an eye for detail.

Eleven-year-old Felix likes being the smallest kid in school.

At least he knows where he fits in. Plus his nickname, “Short-lock Holmes,” is perfect for someone who’s killing it in forensic science club. To Felix, Growth Hormone Deficiency is no big deal.

And then Felix learns that his biological dad was short, too. This one, tiny, itty-bitty piece of information opens up a massive hole in his life. Felix must find his father. He only has a few small clues to work from, but as Sherlock Holmes said, “To a great mind, nothing is little.”

The further Felix gets in his investigation, though, the more he starts to wonder: What if his dad doesn’t want to be found? And what if Felix’s family—his mom, his stepdad, the baby on the way—needs him right where he is?

Tender and uplifting, this warm novel from Christopher Award–winner Carmella Van Vleet celebrates little differences in us that can make a big impact.

Carmella Van Vleet is a former kindergarten teacher and the author of numerous books for children, including To the Stars!, which was co-authored by astronaut Kathy Sullivan and named to the Amelia Bloomer list. Her debut children's novel, Eliza Bing Is (NOT) a Big, Fat Quitter, received the Christopher Award and was named to four state award master lists. Just like Eliza, Carmella loves tae kwon do—she has earned her black belt! She lives in Ohio and can be found online at carmellavanvleet.com