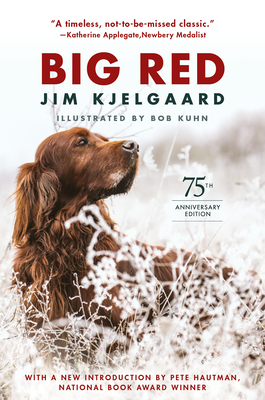 By  Jim Kjelgaard , Illustrated By  Bob Kuhn
$ 9.99
Out of Stock In Store (Click to Order)

A devoted, courageous dog always stands by the boy who loves him in this genuine classic, in print for 75 years.

"A timeless, not-to-be-missed classic." --Katherine Applegate, Newbery Award winning author of The One and Only Ivan

&nbsp;&nbsp;&nbsp;&nbsp; Before Old Yeller or Where the Red Fern Grows, there was Big Red, the classic boy-and-dog story of adventure and friendship in the wild mountains of Pennsylvania.

&nbsp;&nbsp;&nbsp;&nbsp; Danny knows at a glance that Red, the big Irish setter, is the dog he has always dreamed of. But Red is a champion, and Danny is only a trapper's son who lives in a cabin on the mountain. Still, their bond is undeniable. Red is fast and strong, smart and noble, and incredibly loyal--when Danny twists his ankle and can't get home, Red stays by him all night, keeping a wildcat at bay.

&nbsp;&nbsp;&nbsp;&nbsp; This special hardcover anniversary edition has a printed case featuring the original artwork from the 1945 first edition, and includes an interview with the author, Jim Kjelgaard. The original woodcut endpapers are reproduced in the back of the book. A biography of famed wildlife illustrator Bob Kuhn, whose black-and-white artwork brought Big Red to life, is also included, as well as an appreciation by National Book Award winner Pete Hautman.

Born in 1910, Jim Kjelgaard grew up in the Black Forest region of Pennsylvania, which became the setting for many of his books (he called it "the Wintapi region"), including Big Red. In the 1940s and 50s he authored more than 40 books for middle grade readers, making him one of the most influential children's authors of the era. He died in 1959.