Alone Atop the Hill: The Autobiography of Alice Dunnigan, Pioneer of the National Black Press 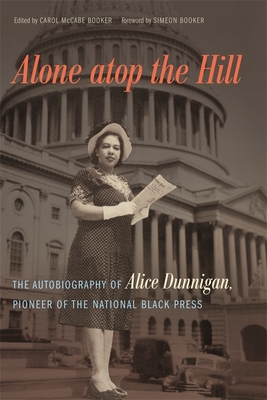 Alone Atop the Hill: The Autobiography of Alice Dunnigan, Pioneer of the National Black Press

In 1942 Alice Allison Dunnigan, a sharecropper's daughter from Kentucky, made her way to the nation's capital and a career in journalism that eventually led her to the White House. With Alone atop the Hill, Carol McCabe Booker has condensed Dunnigan's 1974 self-published autobiography to appeal to a general audience and has added scholarly annotations that provide historical context. Dunnigan's dynamic story reveals her importance to the fields of journalism, women's history, and the civil rights movement and creates a compelling portrait of a groundbreaking American.

Dunnigan recounts her formative years in rural Kentucky as she struggled for a living, telling bluntly and simply what life was like in a Border State in the first half of the twentieth century. Later she takes readers to Washington, D.C., where we see her rise from a typist during World War II to a reporter. Ultimately she would become the first black female reporter accredited to the White House; authorized to travel with a U.S. president; credentialed by the House and Senate Press Galleries; accredited to the Department of State and the Supreme Court; voted into the White House Newswomen's Association and the Women's National Press Club; and recognized as a Washington sports reporter. A contemporary of Helen Thomas and a forerunner of Ethel Payne, Dunnigan traveled with President Truman on his coast-to-coast, whistle-stop tour; was the first reporter to query President Eisenhower about civil rights; and provided front-page coverage for more than one hundred black newspapers of virtually every race issue before the Congress, the federal courts, and the presidential administration. Here she provides an uninhibited, unembellished, and unvarnished look at the terrain, the players, and the politics in a roughand- tumble national capital struggling to make its way through a nascent, postwar racial revolution.

CAROL McCABE BOOKER is a former journalist and Washington, D.C., attorney. She is coauthor with her husband, journalist Simeon Booker, of the highly acclaimed history Shocking the Conscience: A Reporter's Account of the Civil Rights Movement.