Transforming the Academy: Faculty Perspectives on Diversity and Pedagogy 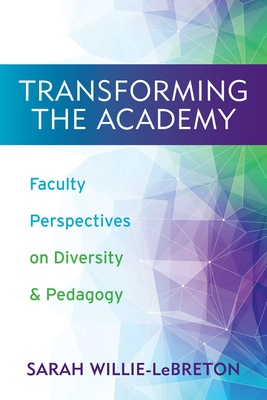 Transforming the Academy: Faculty Perspectives on Diversity and Pedagogy

Editor  Sarah Willie-LeBreton , Contributions by  Michael D. Smith , Eve Tuck , Dela Kusi-Appouh , H. Mark Ellis , Cheryl Jones-Walker , Patrick "Pato" Hebert , Sarah Willie-LeBreton , Anita Chikkatur , Kristin Lindgren , Anna Ward , Betty Sasaki , Aurora Camacho de Schmidt , Daphne Lamothe , Theresa Tensuan
Hardcover
$ 120.00
Unavailable
In recent decades, American universities have begun to tout the “diversity” of their faculty and student bodies. But what kinds of diversity are being championed in their admissions and hiring practices, and what kinds are being neglected? Is diversity enough to solve the structural inequalities that plague our universities? And how might we articulate the value of diversity in the first place?
Transforming the Academy begins to answer these questions by bringing together a mix of faculty—male and female, cisgender and queer, immigrant and native-born, tenured and contingent, white, black, multiracial, and other—from public and private universities across the United States. Whether describing contentious power dynamics within their classrooms or recounting protests that occurred on their campuses, the book’s contributors offer bracingly honest inside accounts of both the conflicts and the learning experiences that can emerge from being a representative of diversity.
The collection’s authors are united by their commitment to an ideal of the American university as an inclusive and transformative space, one where students from all backgrounds can simultaneously feel intellectually challenged and personally supported. Yet Transforming the Academy also offers a wide range of perspectives on how to best achieve these goals, a diversity of opinion that is sure to inspire lively debate.
SARAH WILLIE-LEBRETON is a professor of sociology at Swarthmore College in Pennsylvania, where she has coordinated the Black Studies Program, served as associate provost, and chaired the college’s Task Force on Sexual Misconduct. She is also the author of Acting Black: College, Identity, and the Performance of Race.