The Satanic Verses: A Novel 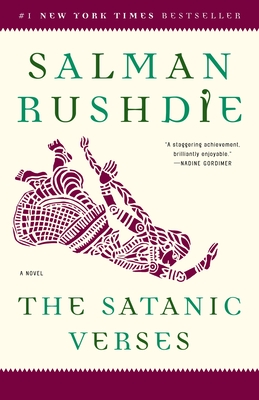 The Satanic Verses: A Novel

By  Salman Rushdie
Paperback
$ 19.00
Likely On Our Shelves

#1 NEW YORK TIMES BESTSELLER • “[A] torrent of endlessly inventive prose, by turns comic and enraged, embracing life in all its contradictions. In this spectacular novel, verbal pyrotechnics barely outshine its psychological truths.”—Newsday

Winner of the Whitbread Prize

One of the most controversial and acclaimed novels ever written, The Satanic Verses is Salman Rushdie’s best-known and most galvanizing book. Set in a modern world filled with both mayhem and miracles, the story begins with a bang: the terrorist bombing of a London-bound jet in midflight. Two Indian actors of opposing sensibilities fall to earth, transformed into living symbols of what is angelic and evil. This is just the initial act in a magnificent odyssey that seamlessly merges the actual with the imagined. A book whose importance is eclipsed only by its quality, The Satanic Verses is a key work of our times.

Praise for The Satanic Verses

“A novel of metamorphoses, hauntings, memories, hallucinations, revelations, advertising jingles, and jokes. Rushdie has the power of description, and we succumb.”—The Times (London)

Salman Rushdie is the author of fourteen previous novels, including Midnight’s Children (for which he won the Booker Prize and the Best of the Booker), Shame, The Satanic Verses, The Moor’s Last Sigh, and Quichotte, all of which have been shortlisted for the Booker Prize; a collection of stories, East, West; a memoir, Joseph Anton; a work of reportage, The Jaguar Smile; and three collections of essays, most recently Languages of Truth. His many awards include the Whitbread Prize for Best Novel, which he won twice; the PEN/Allen Foundation Literary Service Award; the National Arts Award; the French Prix du Meilleur Livre Étranger; the European Union’s Aristeion Prize for Literature; the Budapest Grand Prize for Literature; and the Italian Premio Grinzane Cavour. He is a member of the American Academy of Arts and Letters and a fellow of the American Academy of Arts and Sciences, and he is a Distinguished Writer in Residence at New York University. He is a former president of PEN America. His books have been translated into over forty languages.