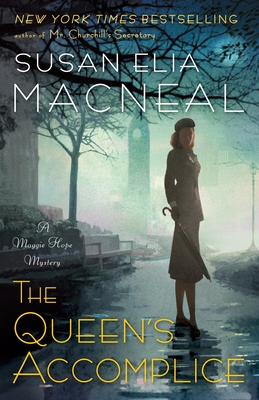 By  Susan Elia MacNeal
Paperback
$ 16
Out of Stock

Spy and code-breaker extraordinaire Maggie Hope returns to war-weary London, where she is thrust into the dangerous hunt for a monster, as the New York Times bestselling mystery series for fans of Jacqueline Winspear, Charles Todd, and Anne Perry continues.

England, 1942. The Nazis’ relentless Blitz may have paused, but London’s nightly blackouts continue. Now, under the cover of darkness, a madman is brutally killing and mutilating young women in eerie and exact re-creations of Jack the Ripper’s crimes. What’s more, he’s targeting women who are reporting for duty to be Winston Churchill’s spies and saboteurs abroad. The officers at MI-5 quickly realize they need the help of special agent Maggie Hope to find the killer dubbed “the Blackout Beast.” A trap is set. But once the murderer has his sights on Maggie, not even Buckingham Palace can protect the resourceful spy from her fate.

Praise for The Queen’s Accomplice

“A fine historical mystery given a feminist slant.”—Booklist

“Plausible and elegant . . . Like all MacNeal’s novels, this one ends on a cliffhanger that will leave readers eagerly awaiting Maggie’s next adventure.”—Shelf Awareness

“Works as a suspenseful stand-alone . . . interesting and informative . . . wartime London is vividly portrayed . . . recommended for those who like their historical mysteries with a large dose of suspense.”—Historical Novel Society

“For those who are Maggie Hope diehards, this latest in the series is sure to satisfy.”—Reviewing the Evidence

“MacNeal’s meticulous research shines through on every page, and pays off with a wartime atmosphere that feels real.”—Crimespree Magazine