A Place We Knew Well: A Novel 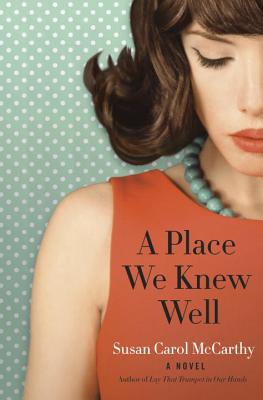 A Place We Knew Well: A Novel

“Susan Carol McCarthy blends fact, memory, imagination and truth with admirable grace,” said The Washington Post of the author’s critically acclaimed debut novel, Lay That Trumpet in Our Hands. Now McCarthy returns with another enthralling story of a family—their longings, their fears, and their secrets—swept up in the chaos at the height of the Cold War, perfect for fans of Caroline Leavitt, Laura Moriarty, and Ellen Feldman.

Late October, 1962. Wes Avery, a one-time Air Force tail-gunner, is living his version of the American Dream as loving husband to Sarah, doting father to seventeen-year-old Charlotte, and owner of a successful Texaco station along central Florida’s busiest highway. But after President Kennedy announces that the Soviets have nuclear missiles in Cuba, Army convoys clog the highways and the sky fills with fighter planes. Within days, Wes’s carefully constructed life begins to unravel.

Sarah, nervous and watchful, spends more and more time in the family’s bomb shelter, slipping away into childhood memories and the dreams she once held for the future. Charlotte is wary but caught up in the excitement of high school—her nomination to homecoming court, the upcoming dance, and the thrill of first love. Wes, remembering his wartime experience, tries to keep his family’s days as normal as possible, hoping to restore a sense of calm. But as the panic over the Missile Crisis rises, a long-buried secret threatens to push the Averys over the edge.

With heartbreaking clarity and compassion, Susan Carol McCarthy captures the shock and innocence, anxiety and fear, in those thirteen historic days, and brings vividly to life one ordinary family trying to hold center while the world around them falls apart.

Praise for A Place We Knew Well

“Gripping . . . Even as those tense days of the Cuban Missile Crisis are depicted in unwavering detail and with inexorable dread, the intimate moments between human beings on the verge of the apocalypse stand out. This multilayered story will remain with you long after you turn the last page.”—Melanie Benjamin, New York Times bestselling author of The Aviator’s Wife

“Susan Carol McCarthy makes a nightmarish moment in America’s recent past terrifyingly immediate and devastatingly personal. This was what it was like to live, and even more astonishingly, to go on loving—as a husband, as a wife, as a young girl on the cusp of womanhood—with the threat of nuclear annihilation hovering only miles offshore.”—Ellen Feldman, author of Next to Love

“Susan Carol McCarthy’s genius is in turning history over to muscle-and-blood human beings who variously hope, fear, lash out, hold steady, and tear at the seams. If you weren’t there, this is as close to living through the Cuban Missile Crisis as you will ever come.”—Tom McNeal, author of To Be Sung Underwater

“Powerful . . . McCarthy vividly evokes a turbulent time in her state’s recent past. . . . [She] memorably captures the impact of the intense military mobilization on residents. But the novel’s greatest strength is its seamless portrayal of what this international chess game means for one man on the brink of losing everything.”—Booklist

Susan Carol McCarthy is the award-winning author of three novels, Lay That Trumpet in Our Hands, True Fires, and A Place We Knew Well, and the nonfiction Boomers 101: The Definitive Collection. Her debut novel received the Chautauqua South Fiction Prize and has been widely selected by libraries and universities for their One Book, One Community and Freshman Year Read programs. A native Floridian, she lives in Carlsbad, California.