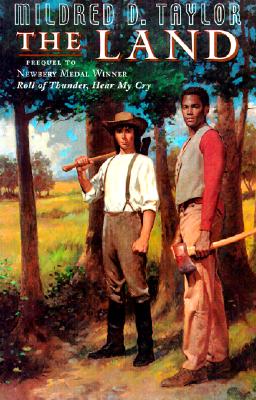 Millions of fans have followed the Logan family in their seven-book series. Living in the South in the not-so-distant past, the Logans are the only black family to own farmland, while most of their black neighbors are sharecroppers on white-owned land. But where did this valuable legacy come from?

The story begins with Paul-Edward Logan, grandfather of Cassie Logan, the beloved protagonist of Newbery Medal–winning Roll of Thunder, Hear My Cry. Born during the Civil War, Paul-Edward is the son of a white plantation owner and a former slave. Though not an unusual heritage, his upbringing is. Paul-Edward’s white father sees to it that he and his sister have many of the privileges their white half-brothers enjoy. But at fourteen, Paul-Edward runs away to seek his fortune. His story is filled with exciting, sometimes heart-breaking adventures, and what is most amazing, his dream of land-ownership, almost impossible for a black person to accomplish in the post–Civil War South, becomes reality.

The Land, like all the books in this award-winning series, is based on the experiences of the Taylor family, bringing historical truth and power to this awe-inspiring story.

Mildred D. Taylor is the author of nine novels including "The Road to Memphis," "Let the Circle Be Unbroken," "The Land," and" Roll of Thunder, Hear My Cry." Her books have won numerous awards, among them a Newbery Medal (for "Roll of Thunder, Hear My Cry"), four Coretta Scott King Awards, and a "Boston Globe--Horn Book" Award. Her book "The Land" was awarded the "L.A. Times "Book Prize and the PEN Award for Children's Literature. In 2003, Ms. Taylor was named the First Laureate of the NSK Neustadt Prize for Children's Literature.

Mildred Taylor was born in Jackson, Mississippi, and grew up in Toledo, Ohio. After graduating from the University of Toledo, she served in the Peace Corps in Ethiopia for two years and then spent the next year traveling throughout the United States, working and recruiting for the Peace Corps. At the University of Colorado's School of Journalism, she helped created a Black Studies program and taught in the program for two years. Ms. Taylor has worked as a proofreader-editor and as program coordinator for an international house and a community free school. She now devotes her time to her family, writing, and what she terms "the family ranch" in the foothills of the Rocky Mountains.