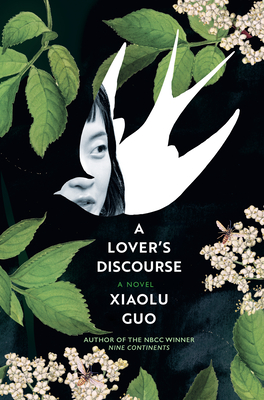 "I don't believe in love at first sight."

I was taken aback. I thought we were definitely in love at first sight.

"What do you mean? Wasn't it clear the moment you picked the elderflowers by the park and we looked at each other? Or was it in that book club?"

You gave me a damp smile, as if my confusion proved that you were right.

A Chinese woman moves from Beijing to London for a doctoral program--and to begin a new life--just as the Brexit campaign reaches a fever pitch. Isolated and lonely in a Britain increasingly hostile to foreigners, she meets a landscape architect and the two begin to build a life together.

A Lover's Discourse is an exploration of romantic love told through fragments of conversations between the two lovers. Playing with language and the cultural differences that her narrator encounters as she settles into life in post-Brexit vote Britain, the lovers must navigate their differences and their romance, whether on their unmoored houseboat or in a cramped and stifling apartment in east London. Suffused with a wonderful sense of humor, this intimate and tender novel asks what it means to make a home and a family in a new land.

Xiaolu Guo was born in south China. She received a MA at the Beijing Film Academy and published six books in China before she moved to London in 2002. The English translation of Village of Stone was shortlisted for the Independent Foreign Fiction Prize and nominated for the International Dublin Literary Award. Her first novel written in English, A Concise Chinese-English Dictionary for Lovers was shortlisted for the Orange Prize for Fiction, and Twenty Fragments of a Ravenous Youth, published in 2008, was longlisted for the Man Asian Literary Prize. Her most recent novel, I Am China, was longlisted for the Orange Prize for Fiction and was a NPR's Best Book of the Year. In 2013 she was named one of Granta's Best of Young British Novelists. Her memoir Nine Continents won the National Book Critics Circle Award for Autobiography in 2017 and shortlisted for the Costa Award as well as the Royal Society of Literature Prize. Xiaolu has also directed several award-winning films including She, A Chinese, and documentaries including Five Men and A Caravaggio and Late at Night. She was an inaugural fellow at the Columbia Institute of Ideas and Imagination in Paris and is currently a visiting professor at Columbia University in New York City. She will serve as the Sidney Harman Writer-in-Residence at Baruch College in the fall 2020 in New York.