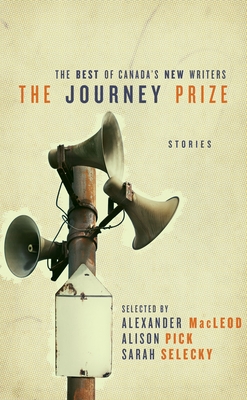 Discover some of Canada's best new writers with this highly acclaimed annual anthology, made possible by the generosity of Pulitzer Prize-winning author James A. Michener.

For more than two decades, The Journey Prize Stories has been presenting the best short stories published each year by some of Canada's most exciting new writers. Previous contributors -- including such now well-known, bestselling writers as Yann Martel, Elizabeth Hay, Annabel Lyon, Lisa Moore, Heather O'Neill, Pasha Malla, Timothy Taylor, M.G. Vassanji, and Alissa York -- have gone on to win prestigious literary awards and honours, including the Booker Prize, the Giller Prize, the Rogers Writers' Trust Fiction Prize, the Governor General's Award, the Commonwealth Writers' Prize, and CBC's Canada Reads competition. The stories included in the anthology are contenders for the $10,000 Journey Prize, which is made possible by Pulitzer Prize-winning author James A. Michener's donation of Canadian royalties from his novel Journey. The winner will be announced in fall 2011.

Among the stories this year: In a moving story about faith and the hope for redemption, a trio of strangers keeps vigil in a hospital waiting room for a man who has miraculously survived a fall from twenty-four storeys. A glamorous party provides the backdrop for a monologue – at once deftly comic and uncomfortably familiar – by a wannabe poet desperate to impress. Over the course of a single day, the eldest son of a cattle farmer must contend with new rites and old burdens, in an elemental story of fathers and sons. When a disgruntled employee decides to take measures into her own hands, she is unprepared for the consequences. In a spellbinding postmodern fairy tale, bears, bees, and shrinking humans populate the small world of the fur trader’s daughter, who is more than she appears to be.

ALEXANDER MacLEOD's debut collection, Light Lifting, was a finalist for the 2010 Scotiabank Giller Prize and the 2011 Commonwealth Writers' Prize for Best First Book. He lives in Dartmouth, Nova Scotia, and teaches at Saint Mary's University in Halifax.

ALISON PICK is the author of two novels, The Sweet Edge and Far to Go, and two books of poetry. Currently on faculty at the Banff Centre for the Arts Wired Writing Studio, she lives with her family in Toronto.

SARAH SELECKY's debut collection, This Cake Is for the Party, was a finalist for the 2010 Scotiabank Giller Prize and the 2011 Commonwealth Writers' Prize for Best First Book. She has been teaching creative writing from her living room for the past ten years. She lives in Toronto.