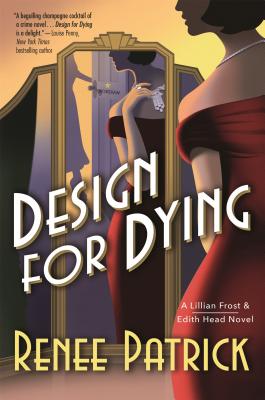 Los Angeles, 1937. Lillian Frost has traded dreams of stardom for security as a department store salesgirl . . . until she discovers she's a suspect in the murder of her former roommate, Ruby Carroll. Party girl Ruby died wearing a gown she stole from the wardrobe department at Paramount Pictures, domain of Edith Head.

Edith has yet to win the first of her eight Academy Awards; right now she's barely hanging on to her job, and a scandal is the last thing she needs. To clear Lillian's name and save Edith's career, the two women join forces.

Unraveling the mystery pits them against a Hungarian princess on the lam, a hotshot director on the make, and a private investigator who's not on the level. All they have going for them are dogged determination, assists from the likes of Bob Hope and Barbara Stanwyck, and a killer sense of style. In show business, that just might be enough.

The first in a series of riveting behind-the-scenes mysteries, Renee Patrick's Design for Dying is a delightful romp through Hollywood's Golden Age.

RENEE PATRICK is the pseudonym for married authors Rosemarie and Vince Keenan. Rosemarie is a research administrator and a poet. Vince is a screenwriter and a journalist. Both native New Yorkers, they currently live in Seattle, Washington.