The God Is Not Willing: Book One of the Witness Trilogy: A Novel of the Malazan World 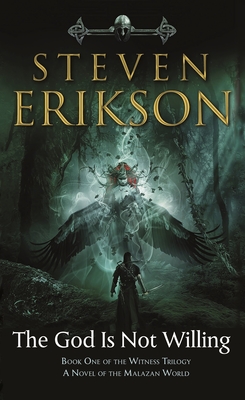 The God Is Not Willing: Book One of the Witness Trilogy: A Novel of the Malazan World

By  Steven Erikson
Mass Market
$ 11.99
Out of Stock In Store

New York Times bestselling author Steven Erikson continues the beloved Malazan Book of the Fallen with this first book in the thrilling Witness sequel trilogy, The God is Not Willing.

Many years have passed since three warriors brought carnage and chaos to Silver Lake.

Now the tribes of the north no longer venture into the southlands. The town has recovered and yet the legacy remains.

Responding to reports of a growing unease among the tribes beyond the border, the Malazan army marches on the new god’s people. They aren't quite sure what they're going to be facing.

And in those high mountains, a new warleader has risen amongst the Teblor. Scarred by the deeds of Karsa Orlong, he intends to confront his god even if he has to cut a bloody swathe through the Malazan Empire to do so.

Further north, a new threat has emerged and now it seems it is the Teblor who are running out of time. Another long-feared migration is about to begin and this time it won't just be three warriors. No, this time tens of thousands are poised to pour into the lands to the south. And in their way, a single company of Malazan marines . . .

Steven Erikson is an archaeologist and anthropologist and a graduate of the Iowa Writers’ Workshop. His Malazan Book of the Fallen series, including The Crippled God, Dust of Dreams, Toll the Hounds and Reaper’s Gale, have met with widespread international acclaim and established him as a major voice in the world of fantasy fiction. The first book in the series, Gardens of the Moon, was shortlisted for a World Fantasy Award. The second novel, Deadhouse Gates, was voted one of the ten best fantasy novels of 2000 by SF Site. He lives in Canada.