Simca's Cuisine: One Hundred Classic French Recipes for Every Occasion 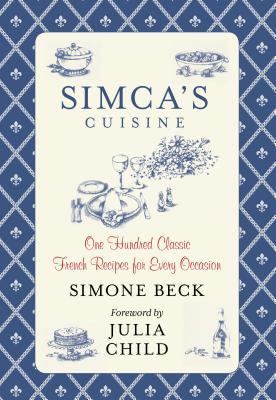 Simca's Cuisine: One Hundred Classic French Recipes for Every Occasion

Millions know Simone "Simca" Beck as Julia Child's French partner in creating the two unforgettable volumes of Mastering the Art of French Cooking. Simca's Cuisine offers the delectable recipes that Beck personally treasured most. She presents family specialties from the well-thumbed notebooks of her mother and grandmother as well as recipes from her life in Normandy, Alsace, and Provence where she gardened, cooked, and entertained. Skillfully adapting French ways to American needs, Simca's Cuisine gives us both simple delights and fabulous concoctions presented with elegant clarity and delightful illustrations. Menus range from informal dinners that include a beef, lamb, and pork stew from "After a winter walk in the woods" and a baked apple dessert from "Autumn in Normandy" to more formal lunches and dinners that include "A gala Sunday lunch" with its saut ed trout with an almond cream sauce and "A spectacular dinner with champagne" that begins with salmon in brioche. With a charming foreword by Julia Child--her student, co-author, collaborator, and friend for forty years--here is a cookbook truly for every occasion.

Simone "Simca" Beck was born in Normandy and studied at the Cordon Bleu, which Julia Child was attending when the two women met at a party. Together they wrote the landmark Mastering the Art of French Cooking. Beck traveled extensively in America and taught at James Beard's cooking school among others. She died in 1991.