The Great Big One 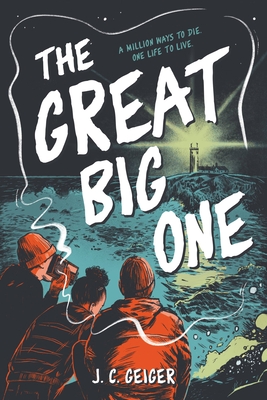 The Great Big One

With natural disasters and nuclear war threatening their small town, two twin brothers find themselves enraptured by mysterious music that could change the course of their lives.

Everyone in Clade City knows their days are numbered. The Great Cascadia Earthquake will destroy their hometown and reshape the entire West Coast—if they survive long enough to see it. Nuclear war is increasingly likely. Wildfires. Or another pandemic. To Griff, the daily forecast feels partly cloudy with a chance of apocalyptic horsemen.

Griff’s brother, Leo, and the Lost Coast Preppers claim to be ready. They’ve got a radio station. Luminous underwater monitors. A sweet bunker, and an unsettling plan for “disaster-ready rodents.” But Griff’s more concerned about what he can do before the end times. He’d like to play in a band, for one. Hopefully with Charity Simms. Her singing could make the whole world stop.

When Griff, Leo, and Charity stumble upon a mysterious late-night broadcast, one song changes everything. It’s the best band they’ve ever heard—on a radio signal even the Preppers can’t trace. They vow to find the music, but aren’t prepared for where their search will take them. Or for what they’ll risk, when survival means finding the one thing you cannot live without.

J.C. Geiger (jcgeiger.com) survived an earthquake on the Mouth of Hell volcano in Nicaragua, learned to drive stick shift on a bookmobile, and once fell asleep while running. He also writes fiction. He is a GrandSLAM Storytelling Champion at The Moth, and his work has appeared on stage at The Second City and No Shame Theatre. His debut novel, Wildman, was named by Bank Street as a Best YA Book of the Year. J.C. lives about sixty miles from the Oregon coast, and makes the trip as often as he can.