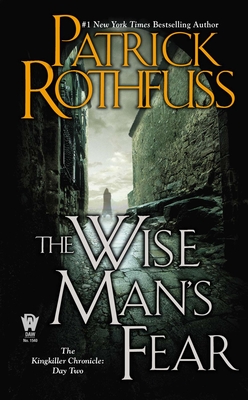 By  Patrick Rothfuss
Mass Market
$ 9.99
Likely On Our Shelves

“There are three things all wise men fear: the sea in storm, a night with no moon, and the anger of a gentle man.”

My name is Kvothe. You may have heard of me.

So begins a tale told from his own point of view—a story unequaled in fantasy literature. Now in The Wise Man’s Fear, Day Two of The Kingkiller Chronicle, Kvothe takes his first steps on the path of the hero and learns how difficult life can be when a man becomes a legend in his own time.


Praise for The Kingkiller Chronicle:

“Rothfuss has real talent, and his tale of Kvothe is deep and intricate and wondrous.”
—Terry Brooks, New York Times-bestselling author of Shannara

"It is a rare and great pleasure to find a fantasist writing...with true music in the words."
—Ursula K. Le Guin, award-winning author of Earthsea

"The characters are real and the magic is true.”
—Robin Hobb, New York Times-bestselling author of Assassin’s Apprentice

"Masterful.... There is a beauty to Pat's writing that defies description."
—Brandon Sanderson, New York Times-bestselling author of Mistborn

Patrick Rothfuss is the bestselling author of The Kingkiller Chronicle. His first novel, The Name of the Wind, won the Quill Award and was a Publishers Weekly Best Book of the Year. Its sequel, The Wise Man’s Fear, debuted at #1 on The New York Times bestseller chart and won the David Gemmell Legend Award. His novels have appeared on NPR’s Top 100 Science Fiction/Fantasy Books list and Locus’ Best 21st Century Fantasy Novels list. Pat lives in Wisconsin, where he brews mead, builds box forts with his children, and runs Worldbuilders, a book-centered charity that has raised more than six million dollars for Heifer International. He can be found at patrickrothfuss.com and on Twitter at @patrickrothfuss.