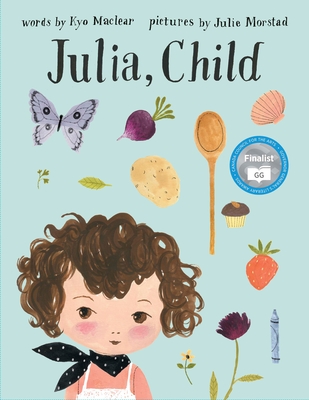 By  Kyo Maclear , Illustrated By  Julie Morstad
Paperback
$ 7.99
Out of Stock In Store (Click to Order)

A charming, whimsically illustrated picture book about joie de vivre, told from the perspective of a child named Julia who loves to cook. Sure to be savored by readers of all ages.


Julia and Simca are two young friends who agree that you can never use too much butter -- and that it is best to be a child forever. Sharing a love of cooking and having no wish to turn into big, busy people who worry too much and dawdle too little, they decide to create a feast for growing and staying young. A playful, scrumptious celebration of the joy of eating, the importance of never completely growing up and mastering the art of having a good time, Julia, Child is a fictional tale loosely inspired by the life and spirit of the very real Julia Child -- a story that should be taken with a grain of salt and a generous pat of butter.

KYO MACLEAR is a critically acclaimed, award-winning author for big people and little people. Her most recent picture books for children include Yak and Dove, The Liszts, The Wish Tree, The Good Little Book (which was shortlisted for the Governor General's Award) and Julia, Child. The Letter Opener, her first novel for adults, won the K.M. Hunter Artists Award and was shortlisted for the Amazon.ca Books in Canada First Novel Award. Her follow-up novel, Stray Love, appeared on several notable "Best of 2012" lists. Kyo's newest book for adults, Birds Art Life: A Field Guide to the Small and Significant, published in January 2017. She lives in Toronto with singer and composer David Wall and their two children.


JULIE MORSTAD is an author, illustrator and artist living in Vancouver, BC. Her book How To marked her authorial debut, and received starred reviews in Kirkus, School Library Journal and Quill & Quire, was a Governor General's Award nominee, and won the Marilyn Baillie Picture Book Award. She is also the illustrator of When You Were Small, recipient of the Marilyn Baillie Picture Book Award; When I Was Small, winner of the Christie Harris Illustrated Children's Literature Prize; Swan: The Life and Dance of Anna Pavlova; Today; and When Green Becomes Tomatoes, which has recieved numerous starred reviews.