The Long Thaw: How Humans Are Changing the Next 100,000 Years of Earth's Climate (Princeton Science Library #98) 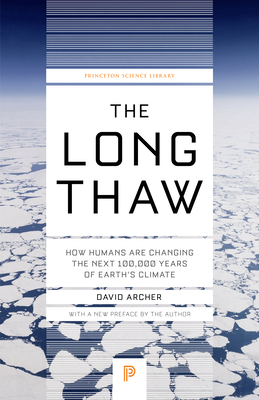 The Long Thaw: How Humans Are Changing the Next 100,000 Years of Earth's Climate (Princeton Science Library #98)

The human impact on Earth's climate is often treated as a hundred-year issue lasting as far into the future as 2100, the year in which most climate projections cease. In The Long Thaw, David Archer, one of the world's leading climatologists, reveals the hard truth that these changes in climate will be "locked in," essentially forever.

If you think that global warming means slightly hotter weather and a modest rise in sea levels that will persist only so long as fossil fuels hold out (or until we decide to stop burning them), think again. In The Long Thaw, David Archer predicts that if we continue to emit carbon dioxide we may eventually cancel the next ice age and raise the oceans by 50 meters. A human-driven, planet-wide thaw has already begun, and will continue to impact Earth's climate and sea level for hundreds of thousands of years. The great ice sheets in Antarctica and Greenland may take more than a century to melt, and the overall change in sea level will be one hundred times what is forecast for 2100. By comparing the global warming projection for the next century to natural climate changes of the distant past, and then looking into the future far beyond the usual scientific and political horizon of the year 2100, Archer reveals the hard truths of the long-term climate forecast. Archer shows how just a few centuries of fossil-fuel use will cause not only a climate storm that will last a few hundred years, but dramatic climate changes that will last thousands. Carbon dioxide emitted today will be a problem for millennia. For the first time, humans have become major players in shaping the long-term climate. In fact, a planetwide thaw driven by humans has already begun. But despite the seriousness of the situation, Archer argues that it is still not too late to avert dangerous climate change--if humans can find a way to cooperate as never before. Revealing why carbon dioxide may be an even worse gamble in the long run than in the short, this compelling and critically important book brings the best long-term climate science to a general audience for the first time. With a new preface that discusses recent advances in climate science, and the impact on global warming and climate change, The Long Thaw shows that it is still not too late to avert dangerous climate change-if we can find a way to cooperate as never before.

David Archer is professor of geophysical sciences at the University of Chicago. He is the author of many books, including The Global Carbon Cycle (Princeton).