Mrs. Frisby and the Rats of Nimh 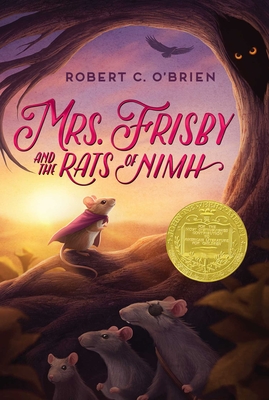 Mrs. Frisby and the Rats of Nimh

By  Robert C. O'Brien , Illustrated By  Zena Bernstein
Paperback
$ 8.99
Likely On Our Shelves

Some extraordinary rats come to the aid of a mouse family in this Newbery Medal Award–winning classic by notable children’s author Robert C. O’Brien.

Mrs. Frisby, a widowed mouse with four small children, is faced with a terrible problem. She must move her family to their summer quarters immediately, or face almost certain death. But her youngest son, Timothy, lies ill with pneumonia and must not be moved. Fortunately, she encounters the rats of NIMH, an extraordinary breed of highly intelligent creatures, who come up with a brilliant solution to her dilemma. And Mrs. Frisby in turn renders them a great service.

Robert C. O’Brien was born in Brooklyn, New York. He attended Williams College and graduated from the University of Rochester. He was a writer and editor for Newsweek, National Geographic, and other publications. He lived in New York City and then in Washington, DC, with his wife and four children. Z for Zachariah—which is now a major motion picture starring Margot Robbie, Chris Pine, and Chiwetel Ejiofor—was completed by his wife and daughter, with the help of his notes, after his death in 1973. He is also the author of Mrs. Frisby and the Rats of NIMH and The Silver Crown.

Zena Bernstein has a BFA from Syracuse University. She began her career as a book illustrator in New York City. Zena uses a combination of watercolor and acrylics in her work. Through a meticulous process, she carefully places several layers of dots of pure color to suggest subtle tones and shades. She refers to her creative work as a labor of love. Her drawings range from the natural world of mushrooms and insects to the unseen world of fairies and gnomes. She’s perhaps best known for illustrating the children’s book Mrs. Frisby and the Rats of NIMH. Zena currently calls Canada home; it’s also the home of the fairies she draws and writes about.