The Trail of Tears (Step into Reading) 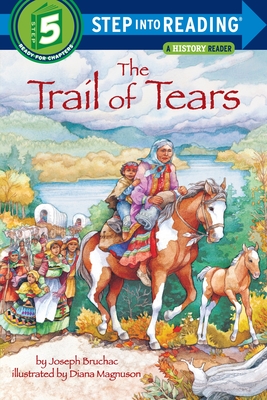 The Trail of Tears (Step into Reading)

By  Joseph Bruchac
Paperback
$ 4.99
Out of Stock In Store

In 1838, settlers moving west forced the great Cherokee Nation, and their chief John Ross, to leave their home land and travel 1,200 miles to Oklahoma. An epic story of friendship, war, hope, and betrayal.

Joseph Bruchac is a highly acclaimed children’s book author, poet, novelist, and storyteller, as well as a scholar of Native American culture. He is the coauthor of the bestselling Keepers of the Earth series with Michael Caduto. Bruchac's poems, articles, and stories have appeared in hundreds of publications from Akwesasne Notes and American Poetry Review to National Geographic and Parabola. He has authored many books for adults and children including Code Talker: A Novel about the Navajo Marines of World War Two, Skeleton Man, and The Heart of a Chief.