Neutron Stars: The Quest to Understand the Zombies of the Cosmos 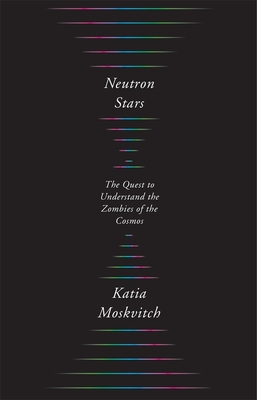 Neutron Stars: The Quest to Understand the Zombies of the Cosmos

The astonishing science of neutron stars and the stories of the scientists who study them.

Neutron stars are as bewildering as they are elusive. The remnants of exploded stellar giants, they are tiny, merely twenty kilometers across, and incredibly dense. One teaspoon of a neutron star would weigh several million tons. They can spin up to a thousand times per second, they possess the strongest magnetic fields known in nature, and they may be the source of the most powerful explosions in the universe. Through vivid storytelling and on-site reporting from observatories all over the world, Neutron Stars offers an engaging account of these still-mysterious objects. Award-winning science journalist Katia Moskvitch takes readers from the vast Atacama Desert to the arid plains of South Africa to visit the magnificent radio telescopes and brilliant scientists responsible for our knowledge of neutron stars. She recounts the exhilarating discoveries, frustrating disappointments, and heated controversies of the past several decades and explains cutting-edge research into such phenomena as colliding neutron stars and fast radio bursts: extremely powerful but ultra-short flashes in space that scientists are still struggling to understand. She also shows how neutron stars have advanced our broader understanding of the universe--shedding light on topics such as dark matter, black holes, general relativity, and the origins of heavy elements like gold and platinum--and how we might one day use these cosmic beacons to guide interstellar travel. With clarity and passion, Moskvitch describes what we are learning at the boundaries of astronomy, where stars have life beyond death.