My Mexico: A Culinary Odyssey with More Than 300 Recipes 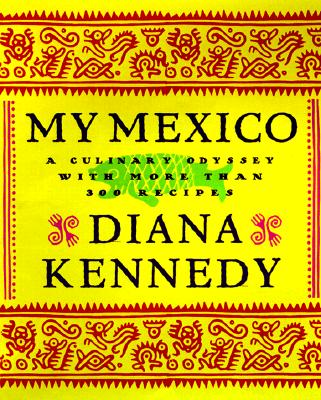 My Mexico: A Culinary Odyssey with More Than 300 Recipes

"Why my Mexico?" asks Diana Kennedy in her introduction to this long-awaited book. The answer is simple and obvious: it is a highly personal book about the Mexico she knows. And no one knows Mexico the way Diana does.     When Diana Kennedy first came to Mexico more than forty years ago, she did not intend to become the country's premier gastronome. But that is what she has become, traveling endlessly, learning the culinary histories of families, hunting elusive recipes, falling under the spell of the beauty of a countryside that produces such a wealth of foods. She has published five books and is referred to variously as the Julia Child, the Escoffier, and the high priestess of Mexican cooking. Most important, she has taken as her eternal project to record not only the wealth of Mexican culinary knowledge and folklore but also the fascinating stories behind it all.

My Mexico records Diana's recent wanderings, along with memories stored away from previous trips.    With wondrous, novelistic prose, Diana tells the story behind her discovery of each dish, from the Pollo Almendrado (Chicken in Almond Sauce) she discovered in Oaxaca to the Estafado de Raya (Skate Stewed in Olive Oil) that delighted her in Coahuila. Yes, there are some fairly simple recipes for inexperienced cooks--look for the new guacamoles and the addictive chilatas. More complicated ones are for aficionados who know the intricacies of the ingredients.

Times have changed greatly since Diana published her first book. More and more ingredients are available in the U.S., and  more and more people have learned of the true joys of real Mexican cooking. One thing has not changed--Diana Kennedy's passion. For those who already are familiar with her work, this volume is a much-needed addition to your library. For those who are not, you are in for a treat of the first order.

Diana Southwood Kennedy went to Mexico in 1957 to marry Paul P. Kennedy, the foreign correspondent for the "New York Times." In 1969, at Craig Claiborne's suggestion, she began teaching Mexican cooking classes. She published her first cookbook in 1972 and has been decorated with the Order of the Aztec Eagle, the highest of its kind bestowed on foreigners by the Mexican government. She lives much of the year in her ecological adobe house in Michoacan, Mexico, which also serves as a research center for Mexican cuisine, and keeps a residence in Austin, Texas.