The Two Towers (Media Tie-in): The Lord of the Rings: Part Two 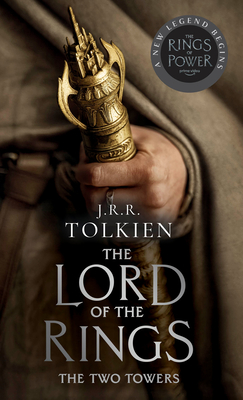 The Two Towers (Media Tie-in): The Lord of the Rings: Part Two

Begin your journey to Middle-earth.

The inspiration for the upcoming original series The Lord of the Rings: The Rings of Power.

The second part of J.R.R. Tolkien’s epic adventure The Lord of the Rings.

The Fellowship is scattered. Some brace hopelessly for war against the ancient evil of Sauron. Others must contend with the treachery of the wizard Saruman. Only Frodo and Sam are left to take the One Ring, ruler of the accursed Rings of Power, to be destroyed in Mordor, the dark realm where Sauron is supreme. Their guide is Gollum, deceitful and obsessive slave to the corruption of the Ring.

John Ronald Reuel Tolkien was born on January 3, 1892, in Bloemfontein, South Africa. After serving in World War I, he embarked upon a distinguished academic career and was recognized as one of the finest philologists in the world. He was a professor of Anglo-Saxon at Oxford, a fellow of Pembroke College, and a fellow of Merton College until his retirement in 1959. He is, however, beloved throughout the world as the creator of Middle-earth and author of such classic works as The Hobbit and The Lord of the Rings. He died on September 2, 1973, at the age of eighty-one.