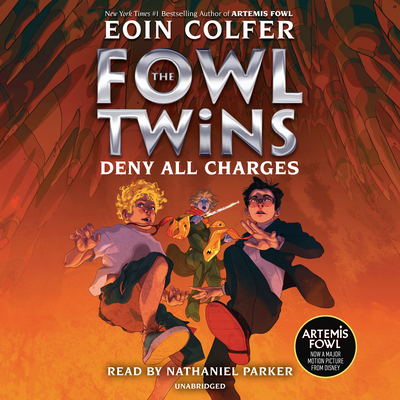 The second Fowl Twins adventure, a spinoff of the blockbuster Artemis Fowl series, starts with a bang--literally.

Artemis's little brothers Myles and Beckett borrow the Fowl jet without permission, and it ends up as a fireball over Florida. The twins plus their fairy minder, the pixie-elf hybrid Lazuli Heitz, are lucky to escape with their lives. The Fowl parents and fairy police force decide that enough is enough and the twins are placed under house arrest. But Myles has questions like: Who was tracking the Fowl jet? Why would someone want to blow them out of the sky? What is the bigger picture? These questions must infuriate someone, because Myles is abducted and spirited away from his twin. Beckett and Lazuli must collaborate to find Myles and rescue him. Their chase will take them across continents, deep underground, and into subacquatic super villain lairs. They will be shot at, covered in spit, and be at the receiving end of some quite nasty dwarf sarcasm. Will Beckett be able to come up with a genius plan without a genius on hand?

Eoin Colfer (pronounced Owen) is a former elementary school teacher whose Artemis Fowl series has become an international bestseller. He is also the author of The Wish List and the New York Times bestseller The Supernaturalist. He lives in Ireland with his wife and two children. Visit him online at eoincolfer.com.

NATHANIEL PARKER has appeared in several films, including Swimming with Men, The Chronicles of Narnia: The Voyage of the Dawn Treader, and The Bodyguard. On television he has starred in Vanity Fair, Far from the Madding Crowd, and McCallum. His theater credits include Wolf Hall & Bring Up the Bodies, This House, and Speed the Plow, among others. Parker has also narrated many audiobooks, such as the Artemis Fowl series.