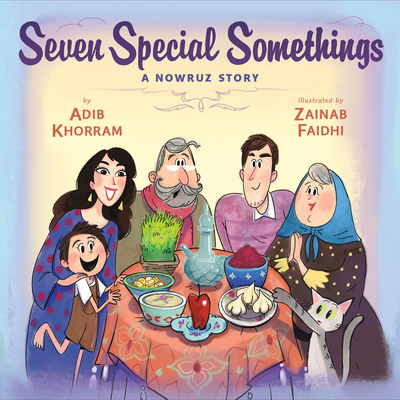 By  Adib Khorram , Illustrated By  Zainab Faidhi
$ 17.99
Out of Stock In Store (Click to Order)

Kian can't wait for Persian New Year! His family has already made a haft-seen, and Kian's baba and maman told him that all the things on it start with S and will bring them joy in the new year. Kian wonders if he could add just one more S, to make his family even happier. Hmm . . . Sonny the cat's name starts with S--but Sonny knocks the whole table over! Can Kian find seven special somethings to make a new haft seen before his family arrives for their Nowruz celebration?

Adib Khorram lives in Kansas City, Missouri. When he isn't writing (or at his day job as a graphic designer), you can probably find him trying to get his hundred-yard freestyle under a minute, learning to do a Lutz jump, or steeping a cup of oolong. His debut novel, Darius the Great Is Not Okay, earned several awards, including the William C. Morris Debut Award, the Asian/Pacific American Award for Young Adult Literature, and a Boston Globe-Horn Book Honor. The sequel, Darius the Great Deserves Better, comes out in August 2020.

Zainab Faidhi is a conceptrual artist, illustrator, animator, and architect. Her work includes the feature film The Breadwinner, which was nominated for an Academy Award for Best Animated Feature. Seven Special Somethings is her first picture book to be published in the United States.