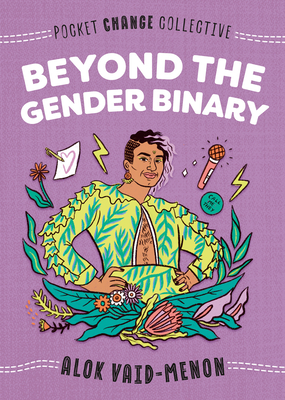 By  Alok Vaid-Menon , Illustrated By  Ashley Lukashevsky
$ 8.99
Likely On Our Shelves

Winner of the 2021 In The Margins Award

"When reading this book, all I feel is kindness."-- Sam Smith, Grammy and Oscar award-winning singer and songwriter

"Beyond the Gender Binary will give readers everywhere the feeling that anything is possible within themselves"--Princess Nokia, musician and co-founder of the Smart Girl Club

In Beyond the Gender Binary, poet, artist, and LGBTQIA+ rights advocate Alok Vaid-Menon deconstructs, demystifies, and reimagines the gender binary.

Pocket Change Collective is a series of small books with big ideas from today's leading activists and artists. In this installment, Beyond the Gender Binary, Alok Vaid-Menon challenges the world to see gender not in black and white, but in full color. Taking from their own experiences as a gender-nonconforming artist, they show us that gender is a malleable and creative form of expression. The only limit is your imagination.

Alok Vaid-Menon is a gender non-conforming writer, performance artist, and public speaker who has been featured by HBO, MTV, NBC, The Guardian, The New York Times, and more. Their creative challenge to the gender binary has been celebrated around the world.

Ashley Lukashevsky is an illustrator and visual artist born and raised in Honolulu, Hawaii, currently based in Los Angeles. Ashley uses illustration and art as tools to strengthen social movements against systemic racism, sexism, and anti-immigrant policy. She aims to tear down these systems of oppression through first envisioning and drawing a world without them. Her clients include Refinery29, Broadly, The Washington Post, Planned Parenthood, Girls Who Code, GOOD magazine, Brooklyn magazine, ACLU, Red Bull, Snapchat, Air Jordan, and Logo TV. Ashley is also the illustrator of the best-selling Antiracist Baby, by Ibram X. Kendi.