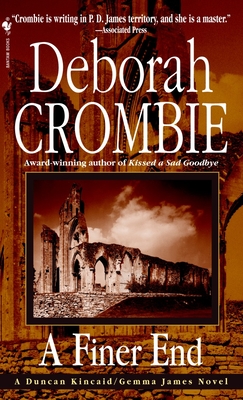 Scotland Yard Detective Superintendent Duncan Kincaid and his partner Sergeant Gemma James return in another spellbinding novel of mysteries--one contemporary, one ancient--an investigation that will challenge them personally and professionally as no case ever has. From the award-winning author of the acclaimed Kissed a Sad Goodbye...

When Duncan Kincaid’s cousin Jack calls from Glastonbury to ask for his help on a rather unusual matter, Duncan welcomes the chance to spend a relaxing weekend outside of London with Gemma--but relaxation isn’t on the agenda. Glastonbury is revered as the site of an ancient abbey, the mythical burial place of King Arthur and Guinevere, and a source of strong druid power. Jack has no more than a passing interest in its history--until he comes across an extraordinary chronicle almost a thousand years old. The record reveals something terrible and bloody shattered the abbey’s peace long ago--knowledge that will spark violence that reaches into the present. Soon it is up to Duncan and Gemma to find the truth the local police cannot see. But no one envisions the peril that lies ahead--or that there is more at stake than they ever dreamed possible.

Deborah Crombie's Duncan Kincaid/Gemma James novels have been nominated for the Agatha, Macavity, and Edgar Awards. She lives with her family in a small North Texas town, where she is at work on the next book of the series, And Justice There Is None.