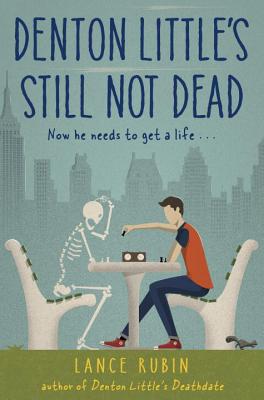 "Denton and his quirky friends are laugh-out-loud funny, even as their riotous adventures raise deeper questions about science, government control, life, and death." -- SLJ

Denton Little lives in a world exactly like our own except that everyone knows the day on which they will die. The good news: Denton has lived through his deathdate. Yay! The bad news: He’s being chased by the DIA (Death Investigation Agency), he can never see his family again, and he may now die anytime. Huh. Cheating death isn’t quite as awesome as Denton would have thought. . . .

Lance Rubin’s debut novel, Denton Little’s Deathdate, showed readers just how funny and poignant imminent death could be. Now in this sequel, he takes on the big questions about life. How do we cope, knowing we could die at any time? Would you save someone from dying even if they were a horrible person? Is it wrong to kiss the girl your best friend is crushing on if she’s really into you instead? What if she’s wearing bacon lip gloss?

“Highly original, fantastically entertaining, and laugh-out-loud funny, Denton Little’s Deathdate is a wild romp through a night like no other.” —Jennifer E. Smith, author of The Geography of You and Me

“Let’s all pray the grim reaper is even half as witty (and wise) as the deadly talented Lance Rubin. Till then: skip this book at your own peril.” —Tim Federle, author of Better Nate than Ever and The Great American Whatever

“Rubin is really funny, but like John Green, he manages to be poignant. . . . In other words, it’s a keeper.” —Bustle

Lance Rubin is the author of Denton Little's Deathdate. He's worked as an actor and written sketch comedy, including successful runs of The Lance and Ray Show at the Upright Citizens Brigade Theatre in New York City. He's also co-written a new musical called Broadway Bounty Hunter. Lance lives in Brooklyn with his wife and son. He is very glad he doesn't know his deathdate. You can follow him online at LanceRubin.com and on Twitter @LanceRubinParty.