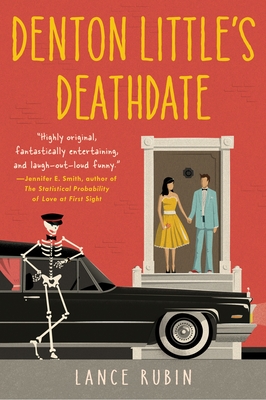 **The Snapchat Original series, Denton's Deathdate, is here—check it out!**

Get ready to die laughing: this is an outrageously funny ride through the last hours of a teenager’s life as he searches for love, meaning, answers, and (just maybe) a way to live on.

Denton Little’s Deathdate takes place in a world exactly like our own except that everyone knows the day on which they will die. For Denton, that’s in just two days—the day of his senior prom.

Despite his early deathdate, Denton has always wanted to live a normal life, but his final days are filled with dramatic firsts. First hangover. First sex. First love triangle—as the first sex seems to have happened not with his adoring girlfriend, but with his best friend’s hostile sister. (Though he’s not totally sure—see, first hangover.) His anxiety builds when he discovers a strange purple rash making its way up his body. Is this what will kill him? And then a strange man shows up at his funeral, claiming to have known Denton’s long-deceased mother, and warning him to beware of suspicious government characters. . . . Suddenly Denton’s life is filled with mysterious questions and precious little time to find the answers.

Fall in love with Denton Little!

"Rubin is really funny but like John Green, he manages to be poignant at the same time. You'll laugh out loud while you read this, but you're probably going to tear up a bit too." --Bustle

"The dialogue is witty and raunchy, the plot is uniquely twisted, and the ending is to die for. This book will fly off the shelves."--VOYA

“Lance Rubin creates a world in which (almost) everyone can answer the question, ‘What would you do if you knew when you were going to die?’ and holy s*#! the answers are hilarious. I don’t think I’ve laughed at death so much in a long, long time. Read this book, it’ll have you dying.” —Isabel Quintero, Morris Award-winning author of Gabi, A Girl in Pieces

“If Six Feet Under had been created by John Hughes: that’s Denton Little’s Deathdate.” —Tim Federle, author of The Great American Whatever

"Highly original, fantastically entertaining, and laugh-out-loud funny, Denton Little's Deathdate is a wild romp through a night like no other." --Jennifer E. Smith, author of The Geography of You and Me

Lance Rubin is the author of Denton Little's Deathdate. He's worked as an actor and written sketch comedy, including successful runs of The Lance and Ray Show at the Upright Citizens Brigade Theatre in New York City. He's also co-written a new musical called Broadway Bounty Hunter. Lance lives in Brooklyn with his wife and son. He is very glad he doesn't know his deathdate. You can follow him online at LanceRubin.com and on Twitter @LanceRubinParty.