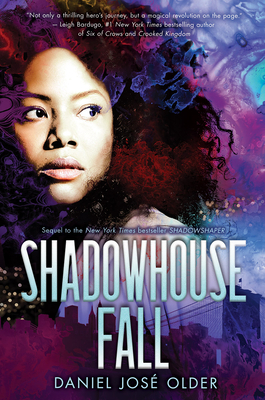 "A magical revolution on the page." -- Leigh Bardugo, New York Times bestselling author of Six of Crows and Crooked Kingdom

Shadowhouse risingSierra and her friends love their new lives as shadowshapers, making art and creating change with the spirits of Brooklyn. Then Sierra receives a strange card depicting a beast called the Hound of Light -- an image from the enigmatic, influential Deck of Worlds. The Deck tracks the players and powers of all the magical houses in the city, and when the real Hound begins to stalk Sierra through the streets, the shadowshapers know their next battle has arrived.Worlds in revolutionSierra and Shadowhouse have been thrust into an ancient struggle with enemies old and new -- a struggle they didn't want, but are determined to win. Revolution is brewing in the real world as well, as the shadowshapers lead the fight against systems that oppress their community. To protect her family and friends in every sphere, Sierra must take down the Hound and master the Deck of Worlds . . . or else she could lose all the things that matter most.In this extraordinary sequel to his New York Times bestselling Shadowshaper, Daniel José Older weaves a fresh, relevant tale of power and protest, while taking us deeper into the magic that has captivated readers everywhere.

Daniel José Older has always loved monsters, whether historical, prehistorical, or imaginary. His debut series for young adults, the Shadowshaper Cypher, has earned starred reviews, the International Latino Book Award, and New York Times Notable Book and NPR Best Book of the Year picks, among other accolades. His debut middle-grade series, Dactyl Hill Squad, was named to the New York Times Notable Book list and to the NPR and Washington Post Best Book of the Year lists, among others. He has worked as a bike messenger, a waiter, and a teacher, and was a New York City paramedic for ten years. Daniel splits his time between Brooklyn and New Orleans.