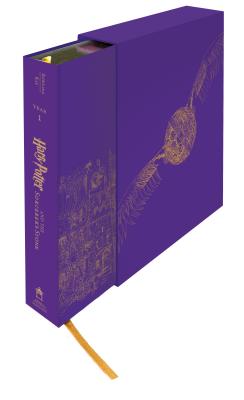 For the first time, J. K. Rowling’s beloved Harry Potter and the Sorcerer’s Stone will be presented in a lavishly illustrated full-color edition. Kate Greenaway Award-winning artist Jim Kay has created over 100 stunning illustrations, making this new edition the perfect gift for a child being introduced to the series, as much as for the dedicated fan. In addition to the jacketed hardcover illustrated edition, we are pleased to offer a small-run, high-end, collector’s format in time for the 2015 holiday season. Special features will include:

A rare opportunity and a luxurious reading experience.

Jim Kay won the Kate Greenaway Medal in 2012 for his illustrations in A Monster Calls by Patrick Ness. Jim studied illustration at the University of Westminster and since graduating has worked in the archives of Tate Britain and the Royal Botanic Gardens at Kew. Jim has produced concept work for television and contributed to a group exhibition at the Victoria and Albert Museum in London. He now lives and works in Northamptonshire, England, with his wife.

This book gets a place of honor (despite the fact that it doesn’t need a recommendation), because it has transcended age boundaries more than any other book I've read. My parents started reading it aloud to my brother and I when we were in elementary school, all clustered together on a couch or spread out across the living room. They did voices, they did gestures, they passed the book back and forth so the other could drink some coffee.

I don't have a particularly strong memory, but that is one that has stuck with me to this day. My family continued to read or listen to the series together until the end. So if you’re looking for a story that functions perfectly as a read aloud, this may be your pick—both the books and the audiobooks are lovely (check out Libro.fm for the audio).