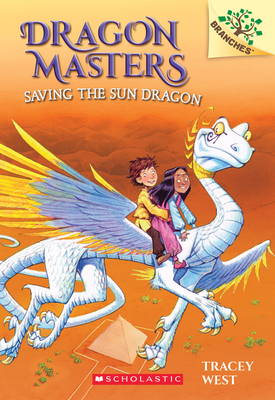 By  Tracey West , Illustrated By  Damien Jones
Paperback
$ 5.99
On Our Shelves Now

DRAGON MASTERS has it all--dragons, Dragon Stones, a wizard, and even some magic!

This series is part of Scholastic's early chapter book line called Branches, which is aimed at newly independent readers. With easy-to-read text, high-interest content, fast-paced plots, and illustrations on every page, these books will boost reading confidence and stamina. Branches books help readers grow! In the second book in this fully-illustrated series, Drake and the other three Dragon Masters (Ana, Rori, and Bo) continue their training. But Ana's dragon, Kepri, is sick. The wizard tries to make her feel better, but his potions are not working. Drake's dragon, Worm, must use his special powers to take the Dragon Masters across the world in search of a cure. What made Kepri sick? Will the Dragon Masters be able to save her? And what dangers will they face along the way?

Damien Jones spent his childhood daydreaming and drawing. He attended the Arts Institute of Bournemouth where he gained a BA Hons in Animation Production. He worked as an animator on films like the Oscar-nominated feature film L'illusionniste (2010) before beginning his career in book illustration. He has worked with publishers such as Simon & Schuster, Random House, and Scholastic. He lives in Cornwall, UK, with his family.
Tracey West has written more than 300 books for children and young adults, including the New York Times bestselling Dragon Masters series, the Pixie Tricks series, and the Hiro's Quest series. She has also appeared on the New York Times bestseller list as author of the Pokémon chapter book adaptations. Tracey lives with her family in New York State's western Catskills. She can be found on Twitter and Instagram at @TraceyWestBooks and on Facebook at @AuthorTraceyWest.