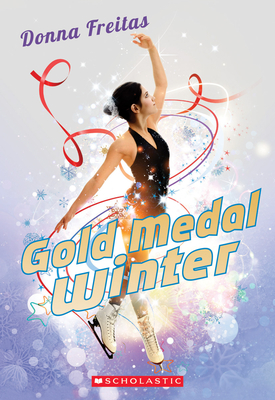 Esperanza Flores is "America's Hope for the Gold!" in this sweet novel about a figure skater who gets the chance to achieve her Olympic dreams.

Just in time for the 2018 Winter Olympics!After years of practice and competitions, of sit spins and perfect poses and thrillingly high jumps, Esperanza Flores will be skating for the United States. But with the excitement of an Olympic shot comes new attention -- and BIG distractions.Suddenly Espi can't go out with her friends, or even out her back door, without people following her every move. The other U.S. figure skaters have a lot more international experience, and they let Espi know they don't think she's ready. And Hunter Wills, the men's figure skating champion, seems to be flirting with her, even as the press matches her up with Danny Morrison, the youngest -- and maybe cutest -- member of the U.S. hockey team.In the midst of all this, Espi is trying to master an impossible secret jump that just might be her key to a medal. Can she focus enough to shut out the drama, find her edge over the competition, and make the Olympics as golden as her dreams?

Donna Freitas participated in competitive gymnastics for seven years, retiring due to injury at the age of fifteen. She is now the author of seven books, including Gold Medal Summer, Gold Medal Winter, This Gorgeous Game, and The Possibilities of Sainthood, which received five starred reviews. She lives in Brooklyn, New York. Please visit her website at www.donnafreitas.com.