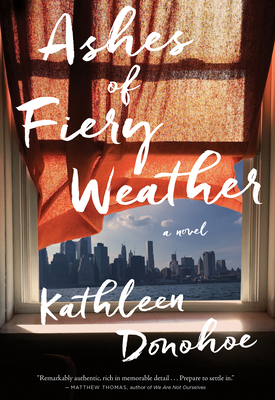 A debut novel about the passionate loves and tragic losses of six generations of women in a family of firefighters, spanning from famine-era Ireland to Brooklyn a decade after 9/11

"There isn’t anything in the world that hurts like a burn.” No one knows the pain of a fire more than the women of the Keegan/O’Reilly clan. Kathleen Donohoe’s stunning debut novel brings to life seven unsentimental, wry, and evocative portraits of women from a family of firefighters.   When we meet Norah — the first member of her family to move from Ireland to New York — she is a mother of three, contemplating her husband’s casket as his men give him a full fireman’s funeral, and faced with a terrible choice. Norah's mother-in-law, Delia, is stoic and self-preserving. Her early losses have made her keep her children close and her secrets closer. Eileen, Delia’s daughter, adopted from Ireland and tough-as-nails, yet desperate for a sense of belonging, is one of the first women firefighters in New York. It is through her eyes that we experience 9/11, blindsided by the events of that terrible day along with her.   Poignant, wise, and immersive, Ashes of Fiery Weather is a tour de force in the tradition of Let the Great World Spin, one that explores the emotional wounds and ultimate resilience of those drawn to fire, as well as the many ways we search for each other, and the many ways we hope to be rescued.

KATHLEEN DONOHOE is the author of Ashes of Fiery Weather. Her stories and essays have appeared in The Recorder, New York Stories, and Washington Square Review. She serves on the Board of Irish American Writers & Artists. She lives in Brooklyn with her husband and son.