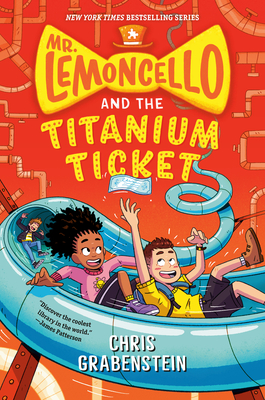 By  Chris Grabenstein
Hardcover
$ 16.99
Out of Stock In Store (Click to Order)

Welcome! For the first time, you are invited INSIDE Mr. Lemoncello's one-of-a-kind Gameworks Factory in book five of the fun-filled, action-packed bestselling series from the much-loved coauthor of the I Funny and Max Einstein series!

Now with a brand-new look packed with shelf and kid appeal!

Far away from his magical library, everyone's favorite game maker, Luigi Lemoncello, is building something new. Something SECRET. And he's about to let the world see it. He'll reveal that hidden deep within the Lemoncello-tastic new building is a single ticket. A titanium ticket.

Four lucky boys and girls are about to win the chance to go inside the building on a spectacular scavenger hunt that will take them through bigger-than-life live-action games--towering, skyscraper-size Jenga; dizzying real-life Chutes and Ladders; death-defying games of Rush Hour; plus ball pit moats and more! Each game will get the players closer to the titanium ticket. But the real secret? Mr. Lemoncello is thinking about his legacy, and whichever player finds the ticket will be the first to win a spot in an elite group of kids who will compete in the next books to win Mr. Lemoncello's ENTIRE EMPIRE!

CHRIS GRABENSTEIN is the New York Times bestselling author of the wildly popular Mr. Lemoncello series, the Welcome to Wonderland series, and many other books, as well as the coauthor of numerous page-turners with James Patterson, including the Max Einstein series, and of Shine!, cowritten with Chris's wife, J.J. Grabenstein. Chris lives in New York City. Visit him at ChrisGrabenstein.com and on Twitter at @CGrabenstein.