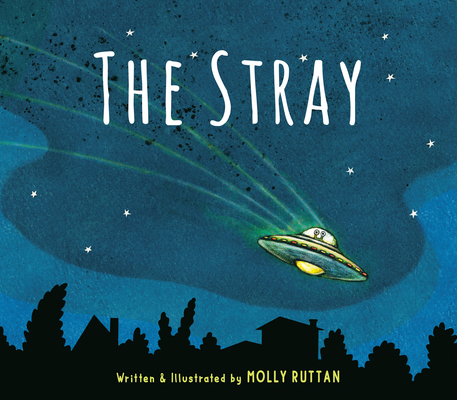 When a family goes for a stroll one morning and encounters an adorable little creature with no collar or tag (who just happens to be sitting in the wreckage of an unidentified crash-landed object), they happily adopt the lovable stray. They name him Grub and set about training him, but that works surprisingly . . . poorly. Taking him for a walk is an unexpected adventure, too. As hard as they try to make Grub feel at home, it's just not working. Could he already have a family of his own? Maybe he isn't really a stray, after all--just lost. But how on earth will they be able to find his family when he seems to come from somewhere . . . out of this world?

Molly Ruttan (mollyruttan.com) illustrated I Am a Thief (by Abigail Rayner), and The Stray is the first book she has both written and illustrated. She grew up in Hastings-on-Hudson, New York, earned a BFA in graphic design from the Cooper Union School of Art in New York, and established a career as a graphic designer and illustrator in Los Angeles. She is married to her childhood friend and music producer, Gabriel Moffat. In addition to illustrating, drawing, painting, and writing, and parenting three daughters, Molly works part-time as a freelance graphic designer; plays drums and sings in the eclectic-folk rock band New Garden; creates artwork for, records, and performs as a backup singer and percussionist in the progressive art rock band Phideaux (bloodfish.com); and is a member of the Silverlake Conservatory of Music's adult choir Silverlake Singers.