Five Days: The Fiery Reckoning of an American City 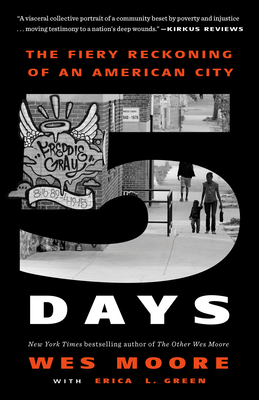 Five Days: The Fiery Reckoning of an American City

“An illuminating portrait of Baltimore in the aftermath of the April 2015 death of Freddie Gray . . . Readers will be enthralled by this propulsive account.”—Publishers Weekly

From the New York Times bestselling author of The Other Wes Moore, a kaleidoscopic account of five days in the life of a city on the edge, told through eight characters on the front lines of the uprising that overtook Baltimore and riveted the world

When Freddie Gray was arrested for possessing an “illegal knife” in April 2015, he was, by eyewitness accounts that video evidence later confirmed, treated “roughly” as police loaded him into a vehicle. By the end of his trip in the police van, Gray was in a coma from which he would never recover.

In the wake of a long history of police abuse in Baltimore, this killing felt like the final straw—it led to a week of protests, then five days described alternately as a riot or an uprising that set the entire city on edge and caught the nation's attention.

Wes Moore is a Rhodes Scholar, bestselling author, decorated combat veteran, former White House fellow, and CEO of Robin Hood, one of the largest anti-poverty nonprofits in the nation. While attending Gray’s funeral, he saw every stratum of the city come together: grieving mothers, members of the city’s wealthy elite, activists, and the long-suffering citizens of Baltimore—all looking to comfort one another, but also looking for answers. He knew that when they left the church, these factions would spread out to their own corners, but that the answers they were all looking for could be found only in the city as a whole.

Moore—along with journalist Erica Green—tells the story of the Baltimore uprising both through his own observations and through the eyes of other Baltimoreans: Partee, a conflicted black captain of the Baltimore Police Department; Jenny, a young white public defender who’s drawn into the violent center of the uprising herself; Tawanda, a young black woman who’d spent a lonely year protesting the killing of her own brother by police; and John Angelos, scion of the city’s most powerful family and executive vice president of the Baltimore Orioles, who had to make choices of conscience he’d never before confronted.

Each shifting point of view contributes to an engrossing, cacophonous account of one of the most consequential moments in our recent history, which is also an essential cri de coeur about the deeper causes of the violence and the small seeds of hope planted in its aftermath.

Wes Moore is the CEO of the Robin Hood Foundation, one of the largest antipoverty organizations in the country. His first book, The Other Wes Moore, was a New York Times and Wall Street Journal bestseller; his second book, The Work, was also a bestseller and was featured on Oprah Winfrey’s SuperSoul Sunday. Moore appears regularly as a commentator on NBC News. He lives in his hometown of Baltimore with his wife and two children.

Erica L. Green is an award-winning journalist for The New York Times.