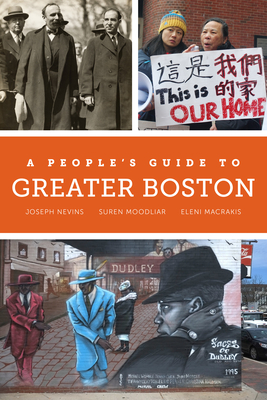 A People's Guide to Greater Boston reveals the region’s richness and vibrancy in ways that are neglected by traditional area guidebooks and obscured by many tourist destinations. Affirming the hopes, interests, and struggles of individuals and groups on the receiving end of unjust forms of power, the book showcases the ground-level forces shaping the city. Uncovering stories and places central to people’s lives over centuries, this guide takes readers to sites of oppression, resistance, organizing, and transformation in Boston and outlying neighborhoods and municipalities—from Lawrence, Lowell, and Lynn to Concord and Plymouth. It highlights tales of the places and people involved in movements to abolish slavery; to end war and militarism; to achieve Native sovereignty, racial equity, gender justice, and sexual liberation; and to secure workers’ rights. In so doing, this one-of-a-kind guide points the way to a radically democratic Greater Boston, one that sparks social and environmental justice and inclusivity for all.

Joseph Nevins was born and raised in the Dorchester section of Boston and is Professor of Geography at Vassar College. His books include A Not-so-distant Horror: Mass Violence in East Timor; Dying to Live: A Story of U.S. Immigration in an Age of Global Apartheid; and Operation Gatekeeper and Beyond: The War on "Illegals" and the Remaking of the US-Mexico Boundary.

Suren Moodliar, a resident of Chelsea, Massachusetts, is both coordinator of encuentro5, a movement building space in Downtown Boston, and editor of the journal Socialism and Democracy. He coedited Noam Chomsky’s Internationalism or Extinction (2020). He completed an MA in Political Science and African Studies at the University of California, Los Angeles.

Eleni Macrakis grew up in Cambridge, Massachusetts, and now works in the field of affordable housing development in the Greater Boston area. She holds a Master in Urban Planning from Harvard University.