Narrative of My Escape from Slavery (African American) 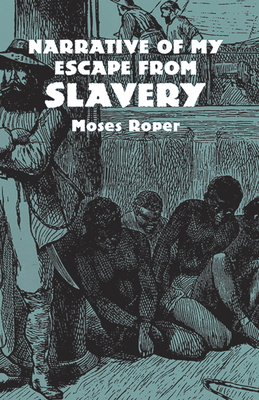 Narrative of My Escape from Slavery (African American)

May this little volume be the instrument of opening the eyes of the ignorant to this system -- of convincing the wicked, cruel, and hardened slave-holder -- and of befriending generally the cause of oppressed humanity. Moses Roper's hopes for his autobiography were realized upon its 1838 publication; today it is considered among the most important and authentic slave narratives. Born a slave in Caswell County, North Carolina, Roper's father was a planter and his mother a black slave. Roper was separated from his mother at the age of six, the first of many transactions in which he was sold or traded to plantation owners throughout the South. His numerous attempts at escape finally met with success in 1833, when the 18-year-old managed to jump ship on a New York-bound packet. In New England, he began his affiliation with the abolitionist movement by signing the constitution of the American Anti-Slavery Society, and he eventually moved to London, where he met several prominent British abolitionists who assisted him in securing an education. Roper remained active in the the antislavery movement, delivering lectures on his slave experiences and impressing listeners with his articulate and moving accounts of the brutality of slave life and his irrepressible longing for freedom. This memoir abounds in the qualities that made Roper a popular speaker, and it offers readers a powerful insider's view of the horrific realities of life in slavery.